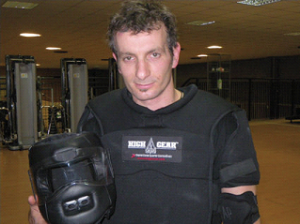 I’m originally from Italy, but after a few years of wanderlust travels, living and working in different parts of the world I relocated to the central coast of California.

I have been practicing Martial Arts since I was a kid and I’m still a student of Modern Farang Mu Sul. This passion and an honest quest for a better way to prepare specifically for self-defense brought me to Blauer Tactical System (B.T.S.) and I became a Personal Defense Readiness Instructor in 2007.

Shortly after, I moved back to Italy where I worked as a Defensive Tactics instructor for Delta Firearms Academy. There I became a Firearm Instructor and helped run their firearms classes (Defensive Shooting/CQB/Executive Protection) until early 2010.

I was exposed to Rob Pincus’s research and Combat Focus Shooting (C.F.S.) through B.T.S. and I soon began to realize the shortcomings of the traditional firearms training doctrine.

Forever on a quest to bring the most useful and efficient training to my students, I became a Combat Focus Shooting instructor in April of 2010.

In September 2011 I took another step forward and became a Crossfit Level 1 Trainer, to integrate functional fitness in our defensive training and make my clients stronger, faster and safer. Since then I’ve been an active Coach at CrossFit Five Cities and Central Coast CrossFit.

I started my training company, Safer Faster Defense, in 2011. The mission: through education and training I want to give my clients the knowledge and tools to stay safe and to prepare them to prevail in dangerous situations.

In 2012 working with Matt Munson, Omari Broussard and Rob Pincus we developed the FitShot program to inspire a higher level of fitness in the shooting community.

In 2012 I finished development of Safer Faster Knife Defense, to provide a simple and intuitive training program that will quickly make the student more efficient in deploying and using a knife in a modern defensive context.

In January 2013 I was invited by Omari Broussard, founder of 10X Defense, to became Director of Training for 10X Defense.

I take this responsibility very seriously and I’m looking forward to bring each member of the instructors’ team expertise to bear as we move forward with developing new programs and refining current ones.

In fact, we are hard at work on the curriculum for Critical Incident Combatives, our un-armed defense program, so we can bring you the most progressive information and most efficient personal safety training program available.

In the same year, with Rob Pincus and Omari Broussard, we developed the School Attacker Response Course (S.A.R.C.) that we offer free of charge to teachers and school administrators.

In 2014, with the usual suspects (Rob and Omari) plus Deryck Poole and Barret Kendrick we created the Reality Based Training Instructor Development Course (R.B.T.I.D.) to provide qualified firearms instructors with the knowledge and ability to integrate Simulations, Force on Force and Scenario Training safely and effectively in their existing curriculum.

And we are only starting…