Martial Arts have been a part of my life since a very young age, and I have been a student of Modern Farang Mu Sul with Grand Master Michael De Alba since 2000. GM De Alba and my fellow students helped me to develop and hone my knife skills, which inspired me to become heavily focused, and maybe a little obsessed, on constantly improving this skillset.

The more I explored other knife systems, the more I began to realize a fundamental discrepancy between how people train with the knife and how knife aggressions happen in real life. I say “knife aggressions” because statistical data show, and empirical evidence demonstrates, that the knife-on-knife duels that most blade systems prepare you for are extremely rare. Another incongruity is the amount of time people spend training increasingly complicated drills and heavily choreographed sequences. The students become virtuosos of the knife for a virtual reality. They train with the expectation of always being in control and aware, convinced that they will see the fight coming and will be ready for it.

These realizations sent me on a quest to find something that made more sense, something that would actually prepare me for the worst case scenario. I first found such a system for hand-to-hand defense, the Personal Defense Readiness (PDR) program, based on Tony Blauer’s research and his SPEAR System. Not long after, I was introduced to Combat Focus Shooting (CFS), the defensive shooting program developed by Rob Pincus. Both of these programs were built on understanding the emotional, psychological, and physiological reactions that occur during a sudden, surprise assault. The body’s natural survival reactions are integrated into these training programs and focus on intuitive skills and the proper mindset to apply them. Their research and curriculum is based on, and supported by, empirical evidence and scientific literature, and these programs have come to re-define the way people think about and prepare for personal protection. I became a certified instructor in each of these systems in 2007 and 2010.

What I could not find was a knife program with a similar approach; one that would dispel myths and misconceptions, and substitute them with practical knowledge and skills. With my knowledge of, and experience in, PDR and CFS, it was only natural for me to combine some of these programs’ principles, concepts, and drills with the knife skills from Modern Farang Mu Sul. The result is a knife training program that teaches simple, intuitive tactics that can be applied in the widest variety of plausible scenarios.

A simple YouTube search for knife attacks (“knife attack myths” is a good one to start with) quickly dispels myths of highly skilled attackers and defenders using complex techniques. My Safer Faster Knife Defense program is based on the realization that most “fights” involving a knife or improvised weapon are actually ambushes where the aggressor utilizes the element of surprise. The attack will elicit fear and jump-start the body’s natural reactions to danger, namely the startle-flinch. This causes, amongst other things, a shunting of blood from the extremities with a consequent loss of dexterity. If you train increasingly complicated technique sequences for increasingly non-plausible scenarios, you disregard how your brain functions in this context and are not accounting for the effects of combat stress on fine or complex motor skills. Integrating the body’s natural reactions in Safer Faster’s training, keeps our tactics simple and more intuitive.

As an example of my adherence to the philosophy of reality-based training, I emphasize training the knife-draw under stress, and integrate empty hand skills, to allow you to fight off the attacker long enough to be able to access your knife. If you fumble your draw, drop the knife, or are unable to open it quickly, you lose precious time and the rest of your repertoire may be of no use. In most knife training systems, few people practice drawing their knives under simulated stress, and the few that do, devote very little time to it. However, the skill you need in the first moment of a potentially lethal altercation, the draw, is essential to your success and should be treated as such in training by devoting enough time and resources to become proficient with it.

Safer Faster Kife Defense provides a simple and intuitive training program that will quickly make the student more efficient in deploying and using a knife in a modern defensive context.

I do not focus on tactics alone but aim to develop the proper mindset to empower the student to manage fear and apply the skills learned in the event of a lethal threat. Developing the proper mindset will make us more dangerous to the aggressor.

I prepare my students using real-life scenarios and train them in techniques that are uncomplicated and effective in life-threatening situations. Safer Faster Knife Defense can help the novice student to develop skills quickly, and also help the advanced student to streamline and hone his/her defensive skill-set. We train to be quick, brutal, and efficient.

Simple
The least amount of variables and complexity the easier to retain and apply under stress.
Intuitive
It works in unison with the body’s natural reactions to fear and violence.
Efficient
It achieves its goal with the least amount of time effort and energy.
Mindset
A habitual or characteristic mental attitude that determines how you will interpret and respond to situations.

Efficiency in responding to a threat makes us safer, faster. 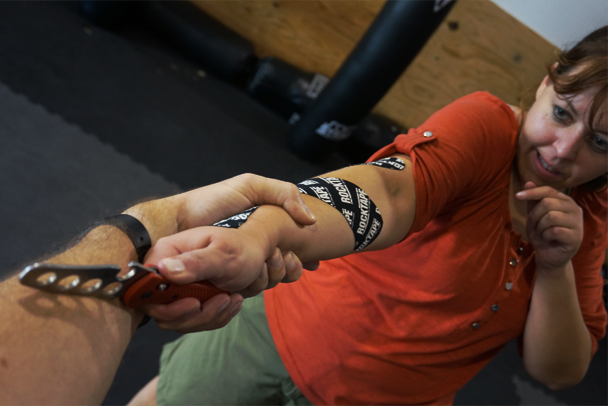 Here are some of the topics of the Fundamentals course:

Fight Back Up to Standing

Defending Against a Gun Grab